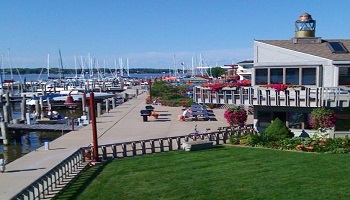 Gary Witkowski, Loan Officer at Great Lakes Commercial Finance (GLCF) and John Burmeister at The Huntington National Bank partnered on a recent refinance project in Holland, MI. Eldean Shipyard, a family owned marina located on Lake Macatawa, accessed the refinance portion of the SBA 504 loan program. The benefit to Eldean Shipyard was to capture a 20 year fixed interest on their existing debt. In addition, the company was able to take advantage of GLCF Veteran Loan incentives, in which GLCF contributed a portion of the closing costs in recognition of their service to our country!

The marina originally began in 1901, with the Eldean’s taking over operations in 1973. This location has been providing Lake Michigan yachtsmen with first class service for more than 100 years. Today, Eldean’s is one of the oldest active marinas and boatyard facilities in the United States.  “Working with the GLCF, SBA, and our local Huntington Bank was a great solution for our re-financing.  The ability to lock-in a competitive long-term rate was a huge factor and, over the years, this decision will help to reduce our costs and free up valuable time that can now be spent elsewhere,” said Wade Eldean, Eldean Shipyard Owner.

The shipyard has slips and docking space for more than 400 boats. The company can easily accommodate vessels up to 140 feet and 75 tonnes. A 168 foot, double sided gas dock allows Eldean to provide refueling service for both gasoline and diesel powered vessels. A lower level dock extension allows for safely fueling jet skis and smaller craft. The company also has ship storage options and a service department. Other amenities available are a ship store, swimming pool, hot tubs, and a clubhouse.